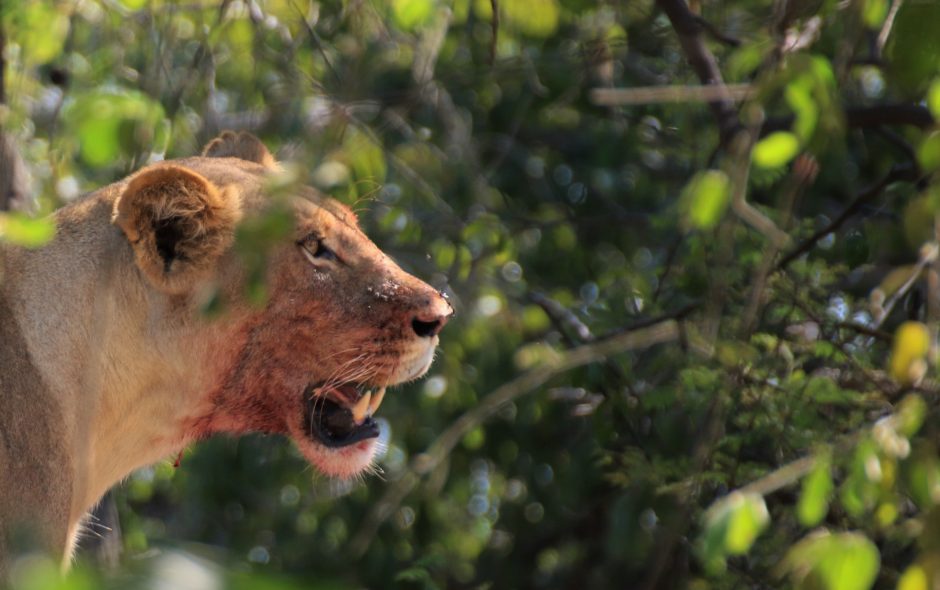 Our First Lion Sighting at Leroo

It wasn’t long after our experiences with Joe that we got our first encounter with the lions. A couple of hours after sunset while we were just settling in with dinner, a lion roared not too far away. We looked at each other, should we go and find them. These questions were asked and answered without a word being spoken. This had happened so often before with no success, would it be different this time? We figured it was close enough to drop our plates and to go and investigate. There were 3 of us, I hopped into the drivers seat and Steve took control of one of the spotlights from the passenger seat and my cousin, Ross took the other spotlight and climbed on the back of the truck. As we raced through the bush, heading for the access point to the riverbed, the excitement began to grow and was almost palpable. Would this be our first encounter with these ghost lions of the Kalahari.We came into the riverbed about a kilometre from camp and thought that the roars we had heard came from somewhere here. The river was quite wide at this point, give or take 100m wide. In front of our camp, the river had a gentle curve on the eastern side leaving the cliffs on the eastern bank and the lee on the west. Here however it was the other way around and so we had entered the riverbed through thick forested vegetation and on the far side were the cliffs that we would later name Leopard Banks. Tonight however as we entered the riverbed we were forced to a decision. The road split, one to our left and one to our right. While we figured the roars had come from here somewhere, we now didn’t know which road to take. We parked the truck, opened the doors and waited for a moment hoping a decision would be forthcoming. It wasn’t.

When no clear decision was available we resolved to opt for the middle ground. We carried on, off road, for the opposite bank. The deepest part of the river was always under the cliffs and so the bed itself was not entirely flat. Our chosen direction would bring us to the deepest part of the river quickest where there were small seeps of water. In our very dry environment we thought water may be what lion were after and so we intended to follow this deeper section and check all the seeps.

Partway across the river, Ross stopped us, he had seen a reflection of eyes from the spotlights. As I said, we wanted to build relationships with these animals and did not want to scare them off. The eyes were still too far away to discern absolutely but we were certain this was them. Instead of heading directly towards them, we parked the vehicle again and switched all our lights off. We waited there in the darkness, intermittently shining the beam of light across the open expanse to see what kind of response our actions would generate. We hoped that this type of behaviour we were displaying would be passive enough to encourage curiosity. We waited.

There was nothing happening. The reflections remained in the distance and we just waited. It was a beautifully clear night and the stars were bright and crisp. I have travelled extensively through Europe, North America and Africa, even living abroad for a spell, and I can say with some level of certainty that I can never remember night skies like here in the Kalahari in winter. There is absolutely no light pollution, and the cold seems to elaborate things and makes them seem almost unrealistically within reach. Seated so close to what could be our first encounter with the lions at Leroo-La-Tau under a sky like tonight was just pure bliss and we took it all in.

We shone the light again off ingot he distance, and no reflection came back at us. They had gone. Darn, never mind, surely we would see them one day. As we started the car to turn back home we caught a lion in our headlights only 15m away. We stopped immediately and switched off the motor. We played the light of one of the spotlights over to the left, nothing, back to the lion, over to the right. There was another. 2 lions. Over again. Another. Again. Another. 4 lions, all youngsters, all on their haunches watching us curiously. They seemed to have placed themselves like the hours on a clock. 1 o’clock, 2 o’clock, 3 o’clock and 4 o’clock. We put out the spotlights and turned the car lights on. We watched the lion on the far left get up and walk around behind the other 3 to the our right and seemed to place himself at what should have been 5 o’clock all about 15 m away. We started the car, reversed a little and swung the nose around centring them in the headlights. One by one they moved as before clearing the centre and flanking us on the right. When we figured out what they were up to things became intense. Ross was climbing through the back window to join us in the security of the front and a game ensued. Every time they flanked us we moved the vehicle and the process started again. After a while we calmed down realising that these lions had never seen people behave like this before and it intrigued them. We played this game for the next hour or so.

This was the beginning of an amazing relationship with the lions of Leroo-la-Tau that we would build on for the next 8 years. I learned a great deal in this period of my life. It seems as if most animal species have a right of way type of approach to each other within the same species, almost as if there is a way they need to behave when entering each others space. For the most part, if you were there first you have more right to be there and the newcomer has a protocol to follow. I have found that we humans are alien enough to the system to be regarded by most species as an honorary uncertain member of their kind albeit a mad one with unpredictable behaviour. The point is though, that if you can learn to anticipate the animals movements and place yourself in their path far enough ahead of them to be out of their zone, when they do come upon you there, then they are encroaching on your space. Each species in each area has a specific way of entering the space of another, but in nearly all instances the ball is in their court as to how close they get to you. The safer they feel the closer they get in a relaxed frame of mind. If you do as so many people do, and and try to get close to wildlife you almost always interfere in what they are doing naturally and this brings out reactionary behaviour from the animals, if even for a moment. You have encroached on their space. This I believe is the difference between good guides and bad guides. Good guides read the situation and anticipate the movements and the mood, bad guides, chase tips and rush in. They may even get better sightings by this kind of brashness, but lets be honest, who like arrogance. This kind of behaviour would only have scared the young lions off and so, from this day on, we made it a habit to always put ourselves into position and wait.