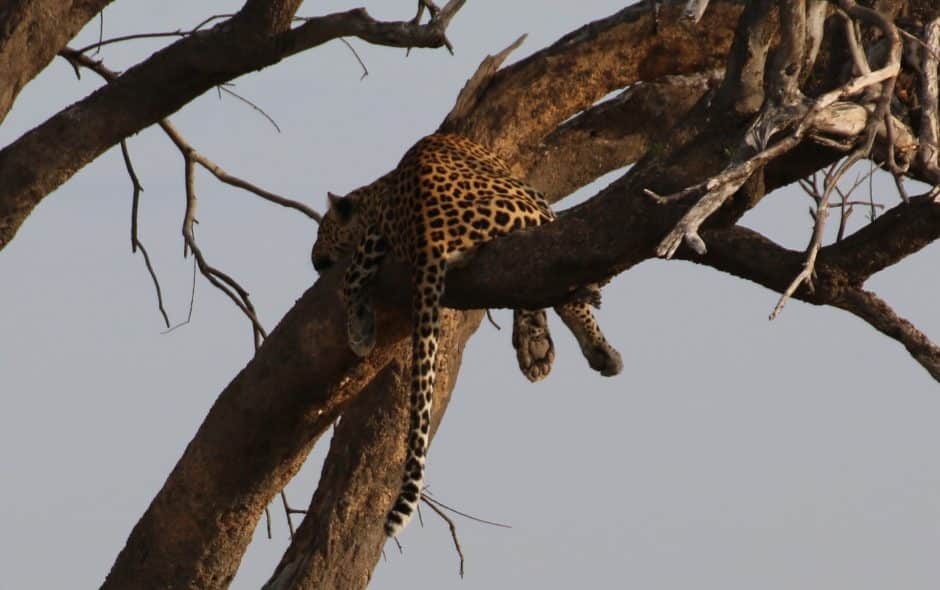 A couple of nights later we were again out on a night drive. It was around 10:30 when we came back to camp opting to take a turn around the waterhole to see if anything of interest had been for a drink.I have described the camp layout of Savannah as a series of ranks under a grove of Camel Thorn trees and how the tree under which the bar had been built seemed to have taken a step forwards when volunteers were called for. I also described briefly how the staff camp was the fourth rank and that it was set behind and to one side of the other 3 ranks. To make it all easier to understand I should describe it as such. The dining tent being central to the first rank faced almost due west. The tented accommodation spread out in a curve to the north and a curve to the south both inclined westwards facing across the floodplain. Using the Dining Tent as a reference the waterhole was situated about 70m away to the north west and the staff camp was about 100m north eastward. There was a game drive road passing across the front of the camp on the far side of the floodplain and the entry to the camp started from a point of this road to the south of the camp coming behind that wing of accommodation tents and ending between the kitchens and the dining tent.

That night as we returned from our drive in the south, we had to go past the camp to get to the waterhole. There was nothing there. We decided instead of entering camp the proper way we would just cut across the open area in between. Just as we neared the Bar, we saw that a leopard had come out of the bushes north of camp and was heading for the waterhole. We did a u turn and went back there, parking on the far side of the waterhole so as not to interfere too much. We switched off the vehicle and waited quietly. We heard him approach and begin lapping the water, so we switched on the spotlights. He continued without paying us much attention. The night was pitch dark. In the distance behind the leopard we could see the lanterns from camp glinting feebly, but in a circle around the leopard where the spotlight shone everything was bright. He was lying in the cat like way where his entire body was off the ground like a man doing push-ups but at that moment in the down position, yet the leopard looked comfortable but powerful. We saw clearly his reflection in the water and this was just as clear except for the ripples from his lapping. Because of the ring of light around him it was as if he was framed in darkness. We sat there mesmerised.

After a short while of drinking some lion roared not to far away and he sat up, not waanting to be caught in the open, he headed back to camp. We followed him at a discrete distance. Once he had walked past the tents into the bus we could no longer follow him. It looked like he was heading to the staff camp so we backed off and went around there to see if we could find him again.

On entering the staff camp, staff began to wake up and to come out of their tents, but we warned them of the presence of the leopard and they should remain inside. We couldn’t find him though. As we drove slowly past the ablution blocks we noticed a small movement. We took a closer look and found the leopard has gone entirely into the staff showers where he was drinking from a bucket of water there that one of the saff had left behind, and the movement was his tail sticking beyound the door. It was quite something to see that this wil animal was so very at home among people and within our camp confines with all the smells that are so very human. It also made us aware that we needed to be more careful in our wanderings as to the animals, our camp was just part of their bush.