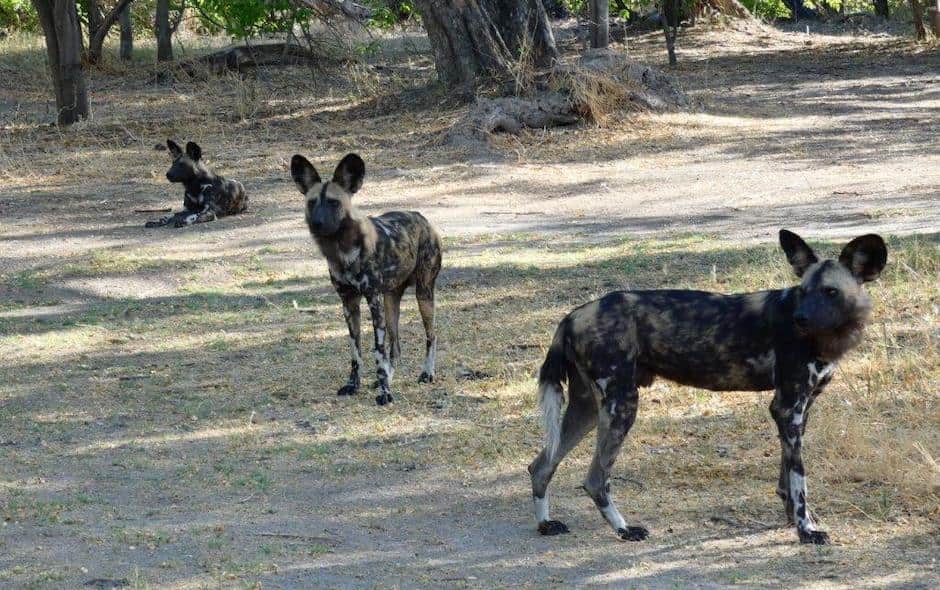 Savannah Camp was set in a number of ranks so to speak under a grove of Camel Thorn trees which had arranged themselves in a semi circle along an ancient waterway or floodplain. The front rank was the tented accommodation with the dining room at the centre like a tank in the middle of a cavalry setup, the second rank was the kitchens, the third was management accommodation and then some distance to the back and to one side was the staff accommodation. In front of the dining tent, was one solitary Camel thorn that had set itself up a short distance away from the rest of the grove almost as if someone had said “any volunteers step forwards” and this tree had done so. Our Camps Bar was set up under this tree which had a fork close to the ground and one side of the tree had grown sort of horizontally from this point and the other vertically. The vertical portion provided great shade and the horizontal section went through the little room we had built to house the fridges for the bar and created a natural arm on which to display our spirit dispensers. The room had an opening that faced, not as one would imagine, the floodplain, but to the side, and the reason for this is that it was to the side of the bar that we had paved a circular area around a fireplace intended for the nightly campfires and this paved area would provide stabilised non-sandy seating capacity for guests to place chairs around the fire. We had also surrounded this with a knee high demarcation in the form of a gum pole fence just to separate the fireplace from the plains.

Savannah was a very new Camp and as such there were many nights it was empty. Before Britt came up to join me, nights were pretty quiet and when I wasn’t out cutting new roads and tracks, finding game hideouts, or mingling with the local lion researchers in the area, I would sit for a while after sunset at the Camps fireplace with my back to the bar for protection, cook up a meal, have a drink and just unwind. As it happened, on this one particular night, I had sent all the staff home for the night and was relaxing by the fire. It was an exquisite evening, almost a full moon time of month, with the moon making it appearance just an hour or so after the sunset. The days were still hot even though it was winter and the nights cooled down to provide some relief from the heat.

There was always a great deal of activity around camp with Elephants raiding the camel thorn seed pods, Impala browsing through camp and from time to time predator activity in camp. Normally I would be armed when I sat at the fire alone for these reasons, but somehow today, this hadn’t occurred to me. I had with me a mag-light and intermittently would shine the light out into the night to see if there was anyone else in camp. I had finished dinner, and was starting to feel like it was time to head off to bed when I heard something off in the bush behind some of the accommodation tents under the grove directly ahead of where I was seated. I shone the torch and the reflection from some eyes showed me we had company. The eyes, all set in pairs, as is normal for most game species, seemed to be doing strange things. Some were moving in a bounding motion with high arcs, and others were bouncing with shorter sharper vertical movements. As the bounding set of eyes came prancing past me I noted they were Impala and they were doing that frisky and unusual bounding that they use to show predators that continuing the chase would be pointless as they had so much energy left in them, they would never be caught. I wondered if they were just playing the fool because for this evening as there seemed to be no predators around. The bouncing eyes just looked like springhares off in the distance.

I felt privileged to be able to just sit there and watch these amazingly cool animals prance right past me as if I weren’t even there. I reverted my torchlight back to the springhares and got the surprise of my life. They weren’t springhares at all, they were Wild Dog. I couldn’t believe my eyes, from what I knew of these creatures they traditionally hunted during the day and here I was at 9 at night face to face with what I believed was a pack of notoriously dangerous vermin. I had grown up in a part of Botswana that had a lot of cattle farmers, and to my knowledge Wild Dog were considered to be the dregs of society and should be shot on site. My wonder at the impala activity had suddenly turned to fear. Some of the dogs, saw me there, and forgot about the Impala they were supposed to be chasing. One of them came up to the knee high demarcation directly across the fire from me and stared at me. We could not have been more than 10 meters apart. I was in trouble. I knew one thing for sure, “do not run”, and so I remained fixed, with my bottom firmly planted in my chair and with my back to the bar, staring into the face of a Wild Dog.

I As I lived at Savannah Camp, located squarely in an area rich in Wild Dog numbers, I would come to know that everything I thought I knew about these amazing creatures couldn’t be farther from the truth and that they had really been given a raw deal. I would learn that they were caring in the way they protected their young and their old and their sick, they hunted where possible, where man had not eradicated their natural prey, only what they could kill quickly, efficiently and cleanly and that although they should have had, they seemed to hold no grudge against mankind. I am sure there are instances where this is not always the case but in my experience in this area they were certainly animals of the highest calibre. I didn’t know all this then, but that night was to be my first lesson into the reality of Wild Dog character.

He just stood there, face to face with me, then was joined by another, then another, then another. I began thinking that Impala was no longer on the menu, I was. I started planning what I would do when he charged, but decided that I would not move until he did. What if I triggered something. Then another dog joined him. Pretty soon I was surrounded by 7 dogs, all on the other side of the knee high demarcation. I am certain this all happened quicker than I can explain it here in this story, but in my mind, it took forever. We watched each other for what seemed to be hours and slowly as it dawned on me that they had no evil intent, my fear evaporated to concern which then was eventually replaced by enjoyment. The Dogs perceived me as one of their own it seemed and were displaying no antagonism at all towards me. If anything they seemed only confused that I was just sitting there and not playing my part in the hunt. “Why had I let that Impala go” they seemed to be asking. As I obviously wasn’t very good at understanding them I simply sat there, dumbfounded. As the minutes ticked on some of the dogs lost interest in me and one by one left me so they could carry on with their hunt. Soon I was all alone again and breathed a deep sigh of relief. I sat on for a while in the dark silence, amazed, confused, and in awe. Eventually it sunk in to my befuddled brain that I had really been lucky there. I considered that am not a lucky person by nature and so I decided to quit while I was ahead of the game. It was time to go to bed, so I went. Quickly.